Creature of the month: The copepod

Hey guys, its Ralf, I’m really sorry for making a Late blogpost, I had to do tons of school & homework, which meant that I barely had enough time to research and put together new blogposts! So sorry!

Anyways, Copepods (subclass Copepoda) are a type of marine animal that usually grows to about 0.5-2mm in length, And they serve an important role in the marine ecosystem, as they are the ones who consume photosynthesizing phytoplankton, diatoms, etc. 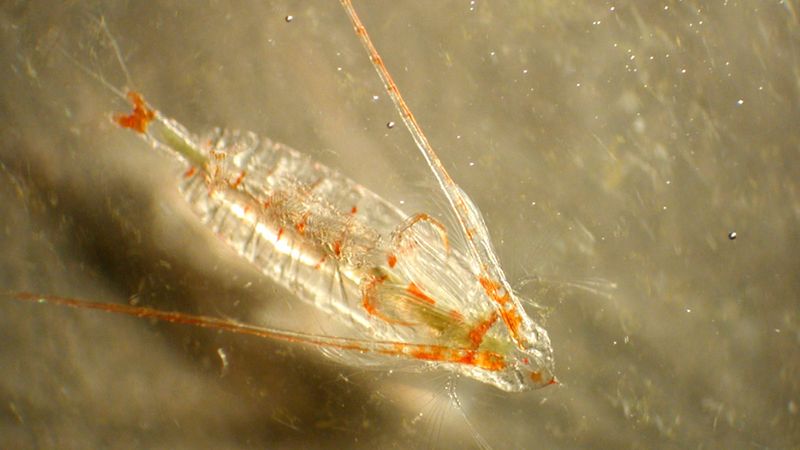 They also act as Hosts of parasites such as tape worms and guineaworms, they also have the ability to act as an important biological defense mechanism by eating mosquito larvae.


Now, lets move on to their appearance, Copepods are segmented aquatic animals that usually have short, cylindrical bodies divided into segments that slowly form as they get older, Copepods are also known for having rounded heads and one eye that can sense light (that can sometimes even make visions) they are also known for their long, long, antennae called setae that helps them sense their environment, detect predators via changes in water velocity, and can even help them mate!

Copepods also have abdomens and thoraxes, which they use to carry eggs, identification of individuals to species level can be hard, identifying younger copepods can be even harder.

Moving on, Copepods diets vary, some are carnivores, some are omnivores, and some may be herbivores, some of their favorites include phytoplankton and diatoms (as discussed earlier) fish larvae, and some parasitic species can even eat muscle tissue!


Copepods eat via making feeding currents in the water, then, they individually perceive and consume food via the maxillae, but, sometimes, they can get a lil bit lazy, and instead opt for the ambush-feeding method, the ambush feeding method is a method where the copapods just sit there, and sense incoming prey using their setae, ambush-feeding is less efficient than the feeding-current method due to the fact that ambush-feeders can only get what is coming close, meanwhile, copepods who use feeding currents are not only able to get prey coming towards them, but, they can also eat organic matter and immobile organisms

Now, let’s move on to the subject of mating, In most copepod orders, mating is done in one of two methods, one is via hydromechanical movements, such as jumping, and the other is through emitting pheromones into the water, which can be detected by another copepod.

When a copepod finds or senses another copepod, they use their setae to grab them and get closer to them so that they can fertilize them.

As I’ve mentioned previously, a female copepods eggs hang out at the sides of the thorax, but what happens after those eggs have been fertilized? Well, they have one of two options:

Most Copepod species like to keep their eggs warm and do not release them into the wild until they are older, why? Because most of them aren’t monsters

And now, we’re gonna move on to the orders of copepods, there are 10 each, and they will be listed below:

I like copepods because they are crucial to the marine ecosystem and are responsible for feeding the world’s oceans, I also like them because they help in stopping malaria from infecting us by eating mosquito larvae.

Anyways, sorry if this post came late, I had to do a lot of stuff.

See you on the other side!